I’m 32 years old. That means I missed reel-to-reel. I never owned an 8-track. But I remember vinyl. In this modern world of MP3s and iPods, there’s something romantic about records.

It’s the ritual that I miss. I remember flipping through my dad’s albums until the immense cover art of one drew me in. I remember unsheathing the thing like a precious gem, touching only the edges. I’d place it on the Technics, press a button, and it would begin turning. I’d gently run the dust brush over it. It was deep red and soft like velvet. Then I’d move the needle, every so slowly, into place. If you did it right, it made no sound at all – you just heard the music start. If you did it wrong, a loud bonk would come out of the speakers, and a stern look would come from my dad.

I was only 10 and I knew these things were older than me. They deserved respect. Reverence. 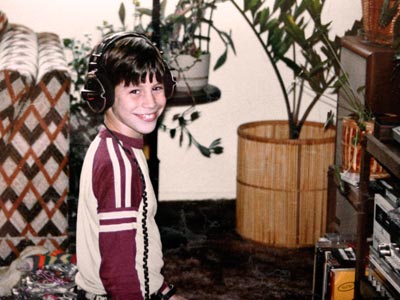 I’d sit, my ears covered by headphones, my eyes filled with the liner notes, my head filled with Pink Floyd, Joni Mitchell, Jackson Browne, or the Beatles. This was analog multimedia. Virtual reality without the geeky goggles. I learned how to make cassette tapes of my favorite albums. Mix tapes to celebrate special times. I began to collect them in boxes and crates. And the crates began to follow me around.

The first time I saw a Compact Disc player, it was at my mom’s boyfriend’s house. It was the 80s, my parents were divorced, and sucking up to the kids was always a good idea. I remember being hypnotized by the spinning silver disc, visible inside the player. It was like looking into the future.

I listened to, and collected, CDs for the next 20 years. I clack-clack-clacked through bargain bins up and down California. I found some of the most important music I ever heard by buying the CD with the cover art I liked the best. I bought CDs at shows to support the bands. I gave and received CDs as presents. I once even asked my step-mom for a De La Soul CD for my 19th birthday. When she couldn’t find it in the “Rock” section, she had to ask for help.

Then, in 1995, the year I graduated from college, my friend Andrew showed me how to covert CDs into MP3s and play them in a new program called MacAmp. I’ll never forget it. The idea of moving a song into the computer and keeping it there was a revelation. He handed me a Zip disc. “This has a hundred songs on it,” he said. I thought he was lying.

I kept buying CDs, but more and more, I listened to them on the computer. I replaced the tape deck in my car with a CD player, and my tapes started to collect dust. A few years ago, I replaced that deck with a CDR player, so I could play CDs with hundreds of MP3s on them.

Then there was the iPod – the little hard drive that could. I bought one in July, 2002, and that’s when everything really started to change. Now the purpose of a CD was only to bring home, unwrap, and feed to the computer. From there, it went into the iPod and that was it. No more pouring over lyrics. Now the ritual was decidedly unromantic. Unwrap and encode. Done.

I bought an adapter to play the iPod in my car and it went everywhere with me. At home, it plugged into the stereo. At work, it plugged into the computer. And while it decreased the physical romance of old media, it brought all that old music to my fingertips. Heather and I went on road trips with more music than we could ever play. Mix tapes were now Playlists.

In the last few years, Apple came out with the final two nails in the coffin of my physical media consumption: the iTunes Music Store, which cut out the CD altogether; and Airport Express, a little white box that finally connected the computer to the living room. Now all I had to do is hit play on my computer, and the music traveled across our home wifi network to the stereo.

Like many revolutions, this one happened quietly for years, and then snapped into sharp focus in one instant. For me, it was a party here at the house. Heather and I had friends over and we were all standing around in the living room. A few of the guests started pouring over my CDs – these physical reminders, this luggage I’ve carted around for years. They were reading off the names, the titles, and I had a sudden revelation: I hadn’t bought a CD in years. Many years.

My CDs had become this snapshot of who I was, like carrying around a driver’s license with a 5 year-old photo where you’re wearing old glasses and a shirt you wouldn’t be caught dead in now. And here I was displaying them like a shrine in an immense tower in my living room.

Not only that, but the tape deck and 5 disc CD player in my tower of black boxes hadn’t been touched in ages. It was time to make a change.

I stripped the AV tower of the CD player and tape deck. I even tossed the VCR for good measure. I put two crates of cassette tapes out on the street. And ripped every last CD into the computer.

And today I completed the transition. I packed my CDs into a wheely suitcase and rolled it down to Amoeba on Haight Street. It took two trips. 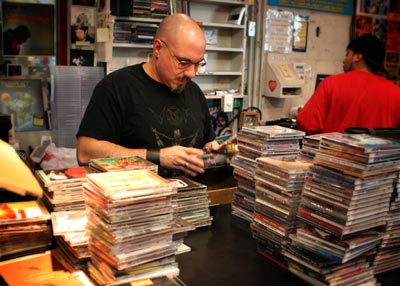 Steve the buyer had a shaved head and a pentagram inked on his shirt and his arm. We made small talk as he flipped through every last CD like a machine, checking each disc for damage, putting each into piles of valuable and not-so-valuable.

I asked him if I brought in the biggest batch today and he said yes, but they see three or four people a day who are selling off collections like me. “iPods?” I asked.

“Yeah, or they’re leaving the city,” he said.

Steve has been doing this for seven years. All those artists and albums categorized in his head into piles of value. It was a wonder to behold.

When it was all over, I was free of many pounds of old media, and had an extra 570 dollars in my pocket. Twenty years of collecting CDs now has a price tag, and it’s enough to buy a brand new iPod and an Airport Express.

I can’t help feeling a certain amount of sadness about the loss of my tapes and CDs. It’s the rituals that I miss. The feeling of running that velvet brush over the spinning vinyl. The smell of a new CD. Waiting for that special hidden song that comes after a few minutes of silence.

They were only objects, I know. They were avatars for the memories they could call forth. Memories that, more and more, are made, shared, and stored on computers. I wonder if the children of today will look back on the downloading of songs and updating of iPods with the same romance. Somehow, I doubt it.

We’re now a post-CD household. When we want to play music on the stereo, it comes from a computer. When I want to wake up to a certain song, I burn a disc for the MP3-capable alarm clock. When I do the dishes, I dock my iPod nano to the speakers in the kitchen. And when I take a drive, a cable connects the iPod to the stereo.

I fully expect that someday iTunes will let me choose what songs play in what rooms. We’ll have a wireless box in a corner that holds all our media, accessible from anywhere. I’ll be able to play video over the wifi just like I can play music now. It’ll all be sortable and scannable and entirely virtual.

And even then, I’ll have one box that I’ll never part with. The one with the small pile of mix tapes and rare CDs that survived the Great Culling of 2006. The ones I just couldn’t seem to part with, no matter how much I love this brave new future.